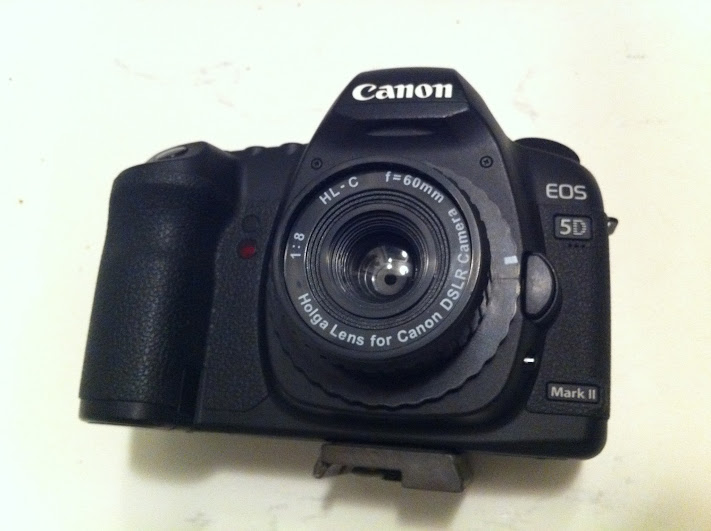 For those of you not in the know, a Holga is a “toy camera” – it’s a plastic camera body, with a plastic lens, that retails for around $25.  It uses 120 film – taking a 6cm x 6cm image.  The pictures taken with it tend to be very unpredictable, with lots of blurriness (it’s hard to focus precisely, and nothing is every REALLY sharp), light leaks (the clips that hold the back on don’t really provide a totally light-proof seal all the time), and in general, a real lo-fi look.  The Holga (and similar cameras) really are partly responsible for spawning photo manipulation applications like Instagram, and they have a huge following (there are over 7,000 Flickr groups with “Holga” in the name).

I bought a Holga a few years ago, and played with it for a while – but of course, getting 120 film developed is a pain (and expensive), and my Lensbaby 2.0 (and more recently, my Lensbaby Composer, with a nearly full set of optics) have taken up my lo-fi attention.  There have been some mods to take Holga lenses and mount them on SLRs, but I’ve never taken the plunge – but I recently ran across the official Holga Lens for Canon SLRs, and decided it was worth $25 to try it out.

So, how does it compare?  Well, I’ve got a few photos from my actual film Holga in my Flickr feed, like this one:

You can clearly see the vignetting in this image, as well as the warping, focus issues, and chromatic aberration.  But it’s still pretty.  🙂

Although I’ve taken tons of pictures with my Lensbabies over the years, I was looking forward to playing with a new toy.  All in all, I’m pleased; although I thought it was a little weird when I opened up the lens and saw this: 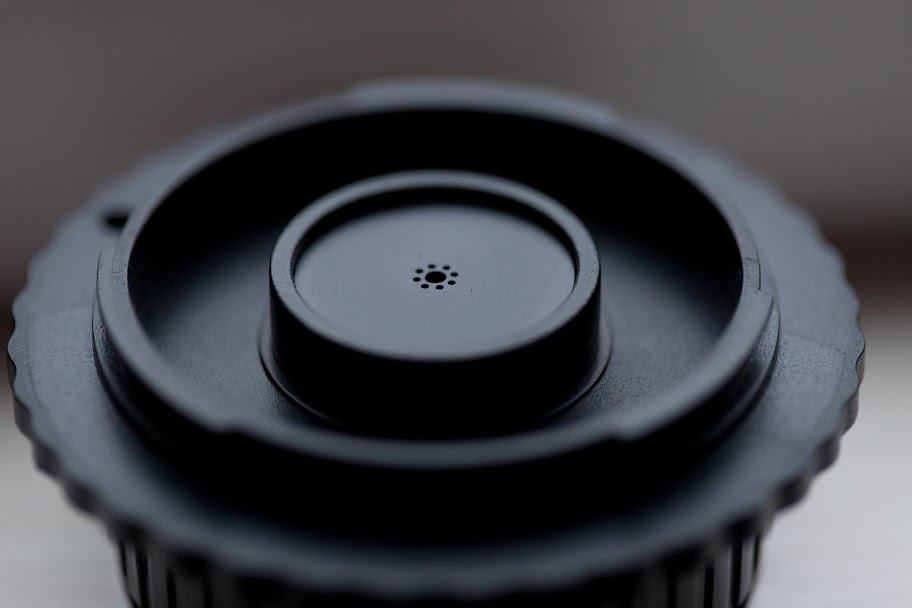 Now, logically, the original Holga lens was designed for a 6x6cm film “sensor” – so it was going to look a lot different when cropped down, even on my full-frame Canon 5D mk ii.  For reference, here’s that same Holga image, but with 35mm crop frame (orange) and APS-C crop frame (yellow): 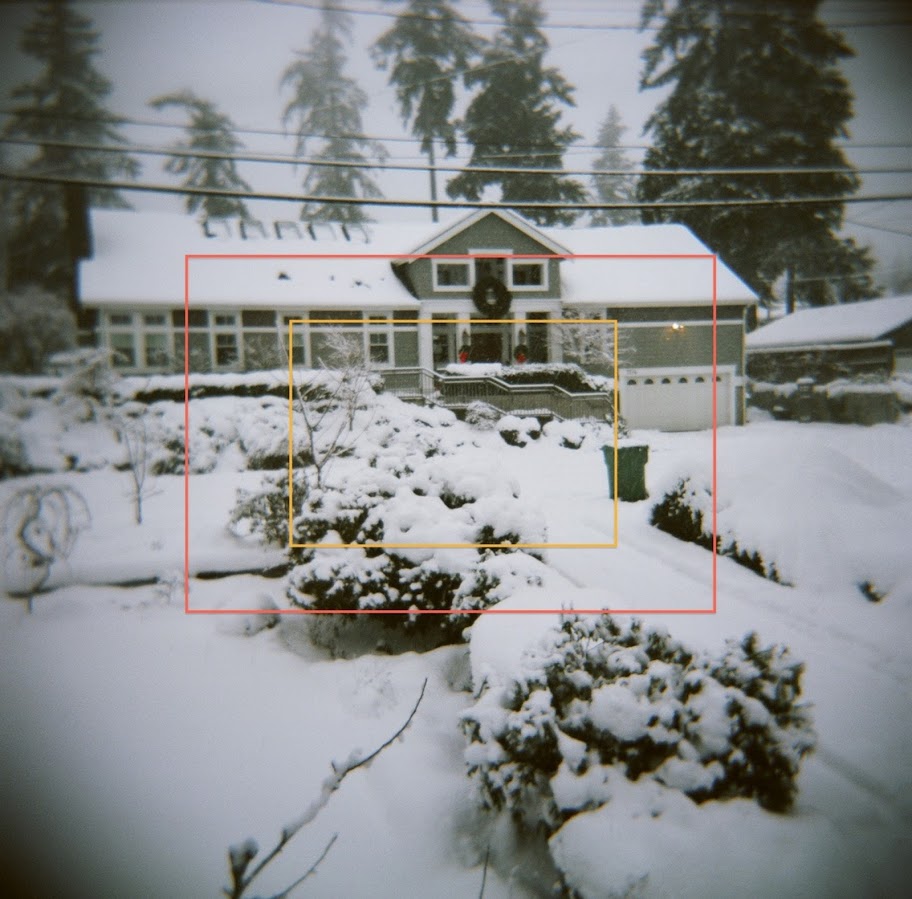 So the odd little aperture arrangement was apparently Holga’s attempt to replicate the vignetting and soft focus of their medium-format lens onto a smaller frame.  (Not surprisingly, this is reminiscent of the Lensbaby Soft Focus Optic aperture discs.)  Somewhat ingenious – Holga can still claim “the original Holga lens!” while still actually getting the vignetting, etc on a smaller frame.  The unfortunate part? They really designed the aperture for APS-C crop cameras (e.g. the Canon 60D or 7D, not really my full-frame 5D mk ii.  A full-frame camera gets much of the outer frame completely vignetted out, and a weird 8-overlapping-circles bokeh pattern to boot: 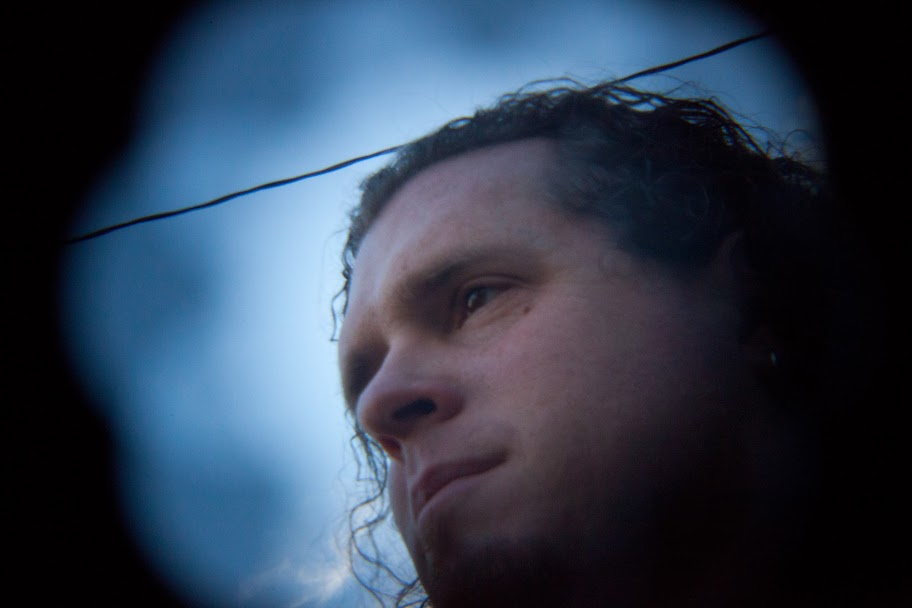 Of course, it works okay on full-frame when the background is dark anyway: 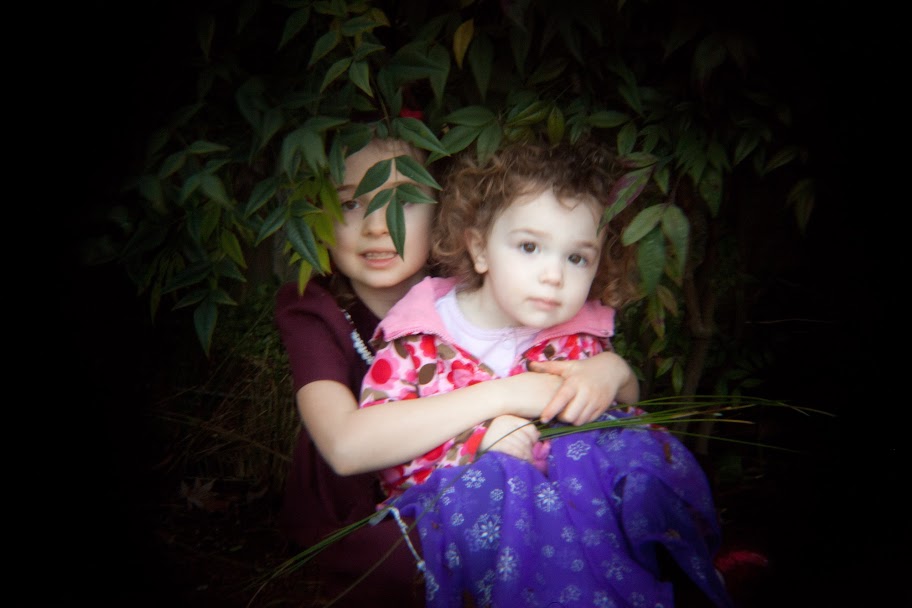 But can look a little weird at other times – which brings me to my one of my main points: this SLR lens was really designed for cropped-sensor cameras, like the 60D or 7D.

The real tragedy, however, is that in adding this funky aperture, the lens goes from the original approximately f/13 aperture to being somewhere between f/32 and f/40 (from an evaluative-metering on full-frame test, I measured it at about f/45; but I think that’s unfairly penalizing for the heavy vignetting on full-frame.  So, trying to use this in anything but lots of light – good luck.  You’ll need a REALLY slow shutter speed – and you will find it nearly impossible to aim, since the viewfinder will be very dark.  Even in bright sunlight, you’ll want to bump up the ISO – for example, this photo of my daughter in bright sunlight was ISO 400, 1/40sec exposure: 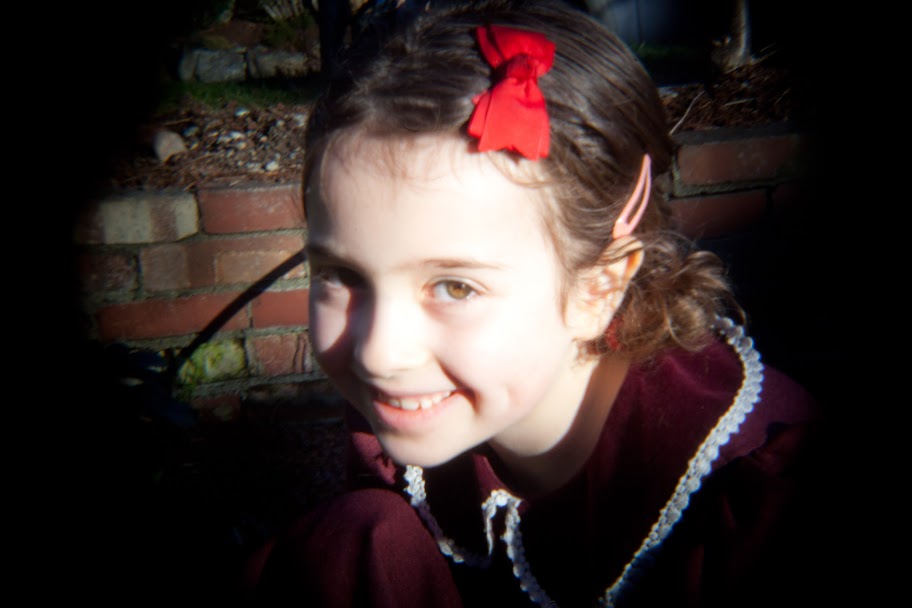 Incidentally, I did discover that funky little aperture disc is removable – it’s glued in to the lens, but only with cheap sticky stuff.  Once you pull it out, though, as you’d expect from the crop example above, there’s basically no vignette at all, even on full frame.  I put it back in, but I think I’m going to try creating an aperture disc to stick in there that is larger than the current one, to get less vignette on full-frame, but still some.  That’ll be a future project, though.

So, pluses to the Holga-for-Canon lens:  easy to use, great serendipity potential.  Downsides: WICKEDLY slow lens (f32-f45-ish on full frame), and has a very strange vignetting pattern in full frame.  Overall, though, absolutely worth the (little) money for a new creative tool.

All the photos I’ve taken with the Holga lens on my SLR so far can be found on my Google+ account in the “Holga Lens” set.